Advancements in cardiovascular research are limited due to the paucity of relevant human in vitro systems. An unlimited supply of human cardiomyocytes could revolutionize our understanding of human heart development, physiology and disease. Groundbreaking studies in the field of pluripotent stem cells (hPSCs = hESCs: human embryonic stem cells and hiPSCs: human induced pluripotent stem cells) over the past years are suggesting that this model system harbors a tremendous potential to address many of the urgent questions in the field of human cardiovascular development and disease.  My lab is interested in studying the basic cellular and molecular mechanisms that regulate the development and differentiation of the cardiovascular lineage from human pluripotent stem cells, with the aim to contribute to generating therapeutically relevant cell populations that can be used for studies of disease mechanisms as well as transplantation and drug discovery.

Project 1: The role of SIRPA in the heart:

In our previous study we have identified the signal-regulatory protein alpha (SIRPA) as a cardiomyocyte-specific cell surface marker in hPSC-derived differentiation cultures of the cardiovascular lineage, which for the first time allowed for cell sorting of highly purified human cardiomyocyte populations (Figure 1). 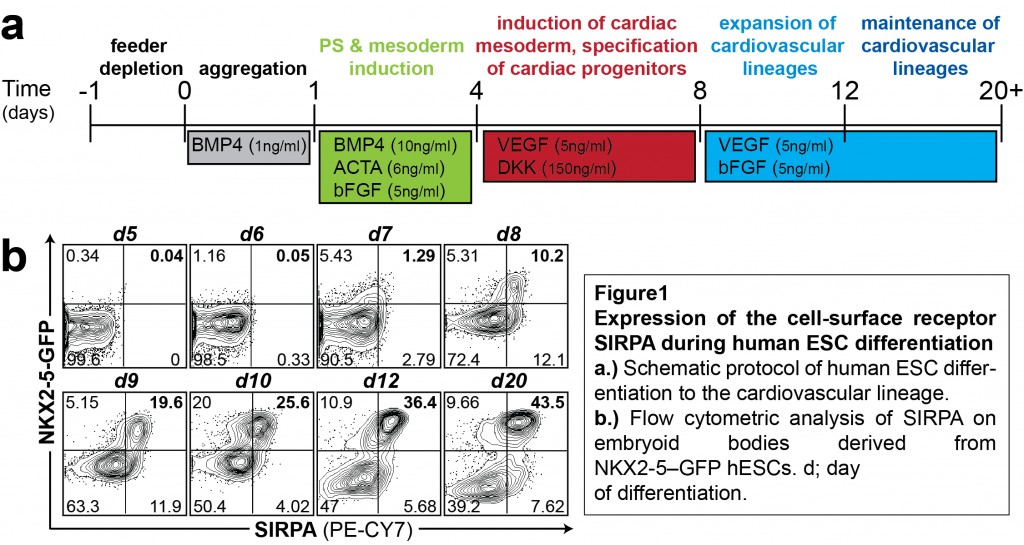 The cardiomyocyte-specific expression of SIRPA in the PSC-derived populations as well as in the fetal heart tissue strongly suggests that this receptor plays a functional role in the development and/or function of the human cardiomyocyte lineage. CD47, the ligand for SIRPA, is up-regulated in parallel with SIRPA during differentiation, which further supports the interpretation that this ligand/receptor pair plays a role in the human cardiomyocyte development and/or function. To this date, no study has described SIRPA expression or function in the heart. Functional studies can efficiently be done in in vivo model organisms, however, we have not been able to detect Sirpa expression in mouse cardiomyocytes, neither in the adult mouse heart or in mouse ESC-derived cardiomyocytes, suggesting that SIRPA expression in cardiomycoytes is specific to the human heart. It is possible that SIRPA function in human cells may relate to aspects of cardiomyocyte physiology and/or function that differ between the two species, further highlighting the importance of having a system that allows for studying human development of the cardiovascular lineage. To investigate the role of SIRPA and CD47 in hESC-derived cardiomyocytes we will follow both gain and loss of function approaches (Figure 2a/b). Using a lentiviral system to introduce shRNA directed against SIRPA and CD47, we have successfully shown effective and reproducible knock-down of SIRPA and CD47 expression by flow cytometry and qPCR (Figure 2c). Our preliminary data suggests that SIRPA plays an important role in cell-cell contact and more work is required to analyze the details of this interesting mechanism. 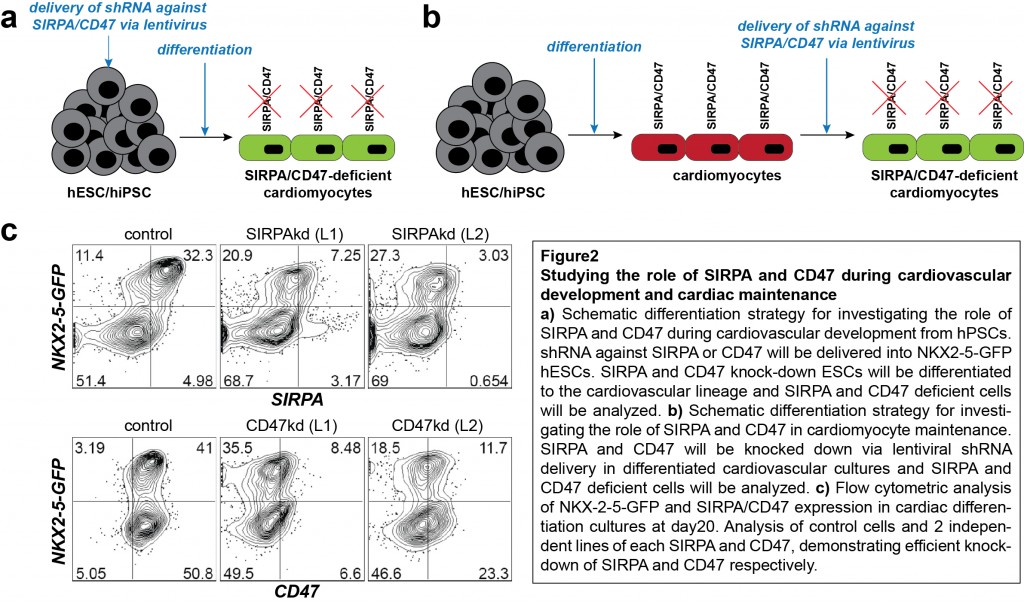 Project 2: Isolation and expansion and characterization of cardiac progenitor-like cells:

An elegant study from Paul Gadue’s laboratory has recently reported the generation of an endodermal progenitor from human PSCs, that can be expanded in culture and give rise to functional cells of various endoderm-derived lineages, demonstrating that cells can be arrested at a particular stage during development and expanded without loosing their potential to differentiate. SIRPA and NKX2-5 are first expressed a few hours before visible contraction during cardiovascular differentiation from PSCs, therefore defining one of the earliest time-points during myocyte development.  We are interested in analyzing this early developmental stage in more detail, focusing on discovering mechanisms that would allow us to both expand these cells as well as maintain them in a cardiac progenitor-like state (Figure 3a).

Project 3: Specification of individual cell types in the human heart

We currently have a good understanding of the developmental processes that lead to the formation of the early heart and due to work from Gordon Keller’s laboratory and others we can reproducibly generate these cells from human PSCs. However, we are lacking insights as to how PSCs can be directed efficiently and specifically to individual subtypes of the heart (such as ventricular, atrial or conduction system cells, Figure 2b). As summarized in an excellent review by Vincent and Buckingham, studies from several groups and in different model organisms have shown over the past years that there are multiple independent cell sources during development, which contribute to the fully differentiated four-chambered heart. These sources include the primary and second heart field as well as the proepicardial organ and neural crest-derived cells. Processes like these will be challenging to faithfully mimic in vitro, however, the human PSC differentiation model system represents a unique opportunity to get access to some of these very interesting early populations. At the same time this model system allows for large scale screening approaches to efficiently define molecular regulators and signaling pathways involved in the key steps during lineage specification (Figure 3b).

Using the hPSC model in order to generate the different cells of the human heart (atrial, ventricular, conduction system, endothelial cells, fibroblast, smooth muscle) will heavily depend on the availability of tools to define and monitor these populations. In order to do this quantitatively and on a single cell level, cell surface molecules represent a cell line independent, fast and easy approach, which in addition allows for the isolation of pure population of the cell type of interest. Currently, only very few markers have been described for a limited number of cell types in the heart. Therefore, my lab will continue to use flow cytometry high throughput approaches, combined and mass spectrometry analysis, to discover novel cell type-specific cell surface molecules in order to support our cell specification studies in the human heart. 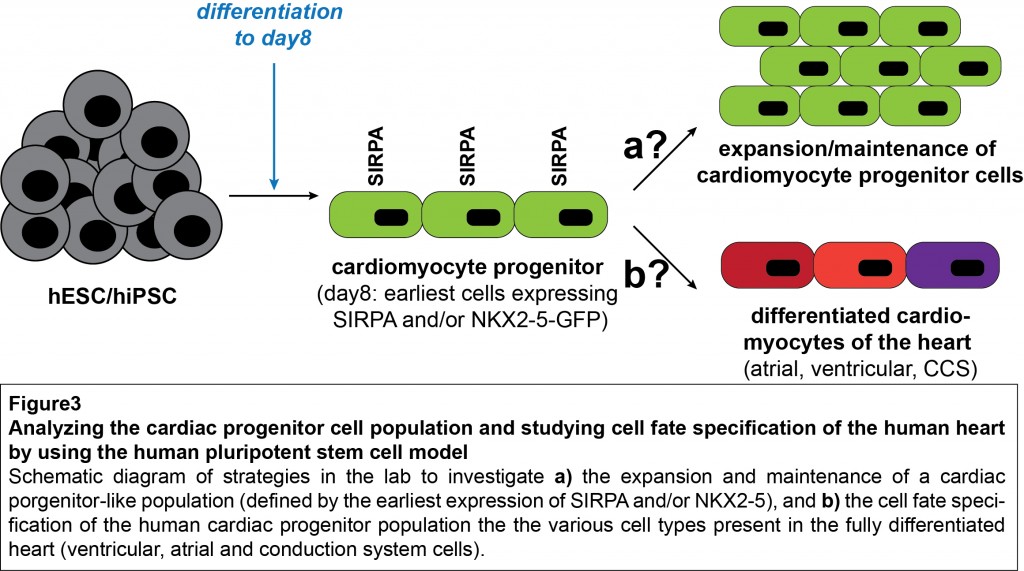 iPSC technology has provided us with the unique opportunity to study the molecular mechanisms and development of disease in previously unimaginable detail. Given the high frequency of heart defects and the lack of an in vivo model for human disease, this represents an invaluable and exclusive tool to study the development of human heart defects. Directed differentiation of disease specific cell lines will provide us with unlimited amounts of cells from different time points during development which can then be used to study the specific defect or for drug screening in order to find appropriate therapeutical strategies.

My lab will focus on distinct set of heart defects with cardiomyocyte-intrinsic phenotypes. These projects are going to be highly collaborative, taking advantage of the vast expertise of cardiologists, bioengineers, calcium signaling and drug development experts at Mount Sinai in order to most comprehensively analyze the cardiac phenotypes.